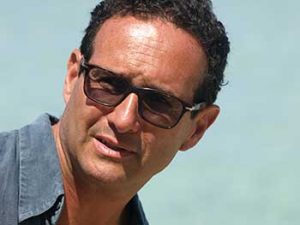 Riccardo Giraudo was born in Cuneo, Northern Italy, on 9 April 1966. He completed his higher education in his home town, where he graduated from an Art school and this was where he discovered and fostered his attraction to Figurative Arts, especially to painting and sculpture.

He has always been independent in his personal research, keeping it free and far from academic patterns. He has explored a large variety  of artistic forms. He has chosen oil, which he has worked with for many years, through both abstract and figurative subjects.

In the year 2000, the artist decided to dedicate his research and profession to sculpture: giving shape to the earth and discovering its secrets became a compelling call. While it is easier to give an interpretation to his paintings, Giraudo’s sculptures represent a slow and complex journey through what is inside and behind the essence of things. This leads the artist to careful research oriented to the studying and testing of volume and finishing effects. These effects appear through works characterized by simple,  clean lines where you can hear the harmony of their curves in contrast with the complexity they were originated from.

The colours he uses are the ones you can find walking along a river: grey, white, beige, brown, black like the stones smoothed by the flowing of the water, and soft, unwrinkled, abandoned to the flowing of time.

It was with his “silent” sculptures that the artist began to take part in various national and international competitions and received prizes and commendations.

Today painting  has once again become his great passion: the artist has developed his poetical call through years of unwearying and humble reflections and has reached appreciable quality and refined technique in his works, which mainly refer to nature. His interest focuses on the fruits of the earth –  which he knows very well, as he keeps moulding it – on animals, the flowers he skilfully composes in still-life and which he portrays with touches of deep nostalgia or peaceful , sensitive, precise, true-to-life contemplation.

In his works, one is able to delicately read his simple, gentle, quiet self-being, as he is constantly careful to listen to an intimate world full of peace and serenity.

His compositions are enwrapped by a reassuring silence, despite the blare of the colours or the wavering of the line. They often appear as if behind the screen of clear glass, like an enchanted reality where the shape actually gives deep meaning  to the content.

The volume, stressed by shadows and lights, makes the objects and the subjects become touchable and physically existing through the colours and the lines. The outcome is that  Giraudo’s reproductions appear “quasi-photographic” in a unique and isolated moment , filled with an unforgettable atmosphere, like a colourfast memory.